I was born in Athens in 1978 and begun photo shooting back in 1993. I studied photography at Leica Academy Athens and graduated in 1999.

An OLYMPUS OM10 which my parents gave me as a gift was the kick off, while in terms of shooting with film, it ended up with a CANNON EOS7 ELAN.

Since 2009 I am photo shooting exclusively with digital cameras or even with my cell phone.

Professionally I deal with the “image” in communication terms.

The “ultimate nothing” and the “absolute whole” trigger my approach to photography: whatever compiles or even subtracts the things that will draw my attention at “that moment” for either an inexplicable or an absolutely reasonable cause.

That happens during my daily journeys, short and long. Journeys mostly in urban centers but also in more remote areas.

Everything begins from the city center of Athens as a base but also as a starting point. As an experience and as a prospect of something new.

In the center of this quest is the huge love I have for this place every single hour and for everything it offers me on a daily basis, in a constant combination of old and new.

The black and white capture is about this wonderful combination along with one more element: the light in all its intensity and extent. 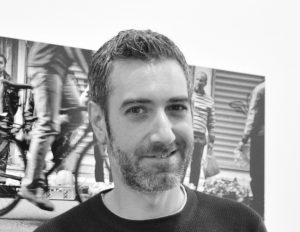